Northern Norway is a land og islands and fjords, and since the dawn of history, boats have played an important part in fishing, trade and transport. It is a country where the weather is rough, and distances are long. So there was a great demand for fast sailing ships, and for ships strong enough to venture out on the open sea, and again require shipwrights who were experts at their job. It so happend that these men were!
Only the southern part of Nordland province has timber suitable for shipbuilding, and it has always been the ship-building centre of the whole region. Here King Olav Tryggvasson, of saga fame, saw the ship that was to be the prototype of the great Viking ships of a somewhat later date, known and dreaded all over northern Europe and far beyond.
Where as in other parts of Norway the techniques and basic designs of Viking times have long since been abandoned and forgotten, the ships from Nordland kept alive the “dragon” ship`s lines right down to modern times, and the Vefsn ship is a true descendant from these ships.
The Vefsn boat is built for fishing an navigation on a difficult river, and its design is fitted to these purposes: the materials are fined down and resilient, and the lines are slim and elegant with a view to negotiating river currents, and tidal currents. Every wooden component of the boat is a product of nature. The many different kinds of timber, and the many profiles required must be selected in the forest and cut on the spot – only the deck planks are factory made. Vefsn boats are built without templets, and a shipwrigt builds only one at a time. Each part must be fitted for the boat it will be part of, and not two boats are ever alike when finished. That is to say these ships are entirely craftsman-made, and not everyone had it in him to become an expert shipwright, however much he wants to. For that job you need to be able to think with your hands. 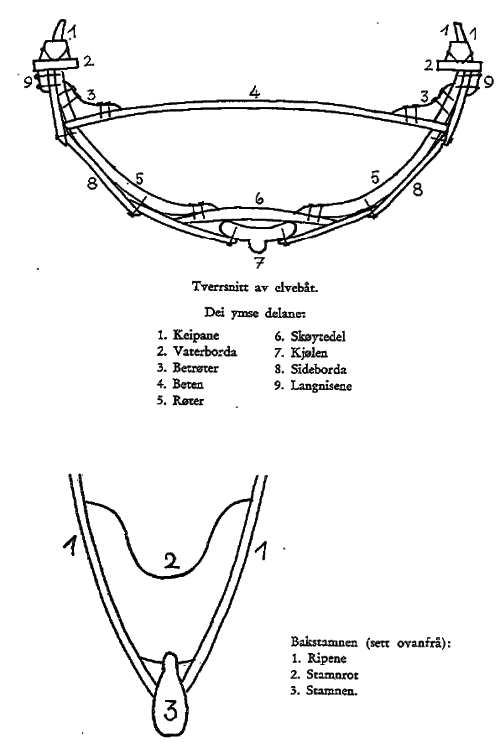 Vefsn boats are thoroughly sound and serviceable, but with their extremely high demands on the quality of raw materials and the ability of the shipwright, they are things of the past. Vefsn boats can not be mass-produced, and the last one of a long line of ship-builders has recently past away.